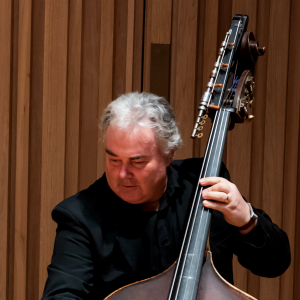 James Manson started playing the double bass at age 14, and he went on to study at the Royal Northern College of Music with Duncan McTier, where he won the Eugene Cruft double bass prize.

He has been principal bass in the Northern Chamber Orchestra since 1989 and works with all the orchestras in the North West including the BBC Philharmonic and the Hallé.

James also enjoys working as a composer and arranger and his work includes several musicals, jingles and music for BBC radio.  He is the Northern Chamber Orchestra’s Composer in Residence, and works with the Education team, delivering workshops in schools around the region.

James Manson’s chair is supported by Ken and Pam McKinlay.