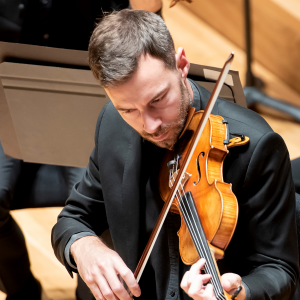 Simon Gilks started playing the violin at the age of three and quickly progressed through the Suzuki discipline of violin playing. At the age of eighteen Simon was awarded a place at the Royal Northern College of Music in Manchester studying under Professor Maciej Rakowski, and graduated in 2005 with a first class honours degree.

During his studies Simon participated in masterclasses with Yair Kless, Shmuel Ashkenasi, Marat Bisengaliev and Jacqueline Ross and was a regular leader of the college orchestras. He has given many public solo performances in the UK and abroad. Perhaps the most significant to note are the concertos he has performed, these include Mozart, Bruch, Saint-Saëns, Dvorak and Mendelssohn.

Since then, Simon has freelanced with a variety of orchestras including The Hallé, Royal Northern Sinfonia and BBC Scottish Symphony Orchestra. In 2008 he accepted a position in the BBC Philharmonic Orchestra and, more recently, was invited to become a member of the Northern Chamber Orchestra.