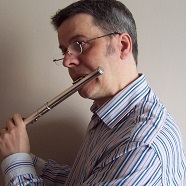 Conrad Marshall studied at the Royal Northern College of Music with Roger Rostron and Trevor Wye.

He graduated, winning the Hiles medal for orchestral playing, and immediately commenced trialling for second flute in The Hallé Orchestra.

Many years of freelancing with The Hallé , Royal Liverpool Philharmonic and Opera North Orchestras followed, along with extensive touring with the Northern Ballet Orchestra and the Orchestra of English National Ballet.

For the last twenty six years he has been Principal Flute of the Northern Chamber Orchestra and as well as frequent performances as concerto soloist, has appeared on many of the thirty  recordings the NCO has made for Naxos.