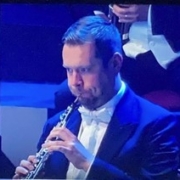 Kenny Sturgeon was born in Liverpool in 1983.  After studying privately with Ruth Davies and Jonathan Small, he went on to study at the Royal Conservatoire of Scotland (formerly the Royal Scottish Academy of Music and Drama) in 2001, where he studied with Stephane Rancourt, Rosie Staniforth and Emma Schied, graduating with a BMus in performance in 2005.  He then won a full scholarship to the Royal College of Music, to study for an advanced postgraduate diploma in performance with Chris Cowie, Gareth Hulse and John Anderson, graduating in 2007 with distinction.  Whilst at the RCM, Kenny was lucky enough to be invited to perform with the European Union Youth Orchestra.

After completing his studies, Kenny embarked on a busy and varied freelance career, performing with almost all of the orchestras in the UK and Ireland, as well as deputising in London’s West End and performing for commercial recording sessions.  In 2012, Kenny was appointed Principal Cor Anglais with the Hong Kong Philharmonic Orchestra under Jaap Van Zweden, returning to the UK in 2013 to undertake trials for various positions within UK orchestras. After trials with BBC Scottish Symphony, BBC Concert Orchestra, Royal Liverpool Philharmonic, English National Opera, Royal Scottish National Orchestra and Welsh National Opera, Kenny was appointed Sub-principal Oboe with the BBC Philharmonic in 2016, and has also been the principal oboe of the Northern Chamber Orchestra since 2015.  With the BBC Philharmonic; as well as broadcasting regularly on Radio 3, he has toured and recorded extensively, and performed at the BBC Proms and several other festivals across the world.  When not in the recording studio or the concert hall, Kenny lives in an old weaver’s cottage in a small village in the Pennines, West Yorkshire.