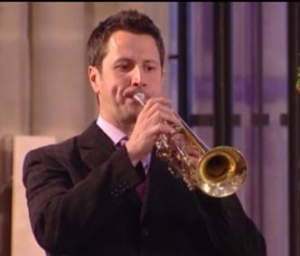 Peter Mainwaring, originally from Llanelli, South Wales, started playing the trumpet and cornet at the age of 9. He joined his local brass band, Burry Port Town Band and then became a member of the National Youth Orchestra of Wales and National Youth Brass Band of Wales, as Principal Cornet.

Peter read Geography at Queen Mary College, University of London before going on to study for a Postgraduate Diploma in Advanced Studies in Performance at the Royal Northern College of Music. Whilst at the RNCM Peter was the recipient of the Sir John Barbirolli Award, in association with the Royal Philharmonic Society.

Peter enjoys a busy and varied freelance career on the Trumpet, working regularly with the BBC Philharmonic, Halle Orchestra, Royal Liverpool Philharmonic Orchestra, Opera North and Manchester Camerata and has toured extensively in Europe, the Middle and Far East. He performs frequently at the BBC Proms, Cheltenham, Edinburgh and Aldeburgh Festivals and has recorded extensively for BBC Radio 3 and Chandos. Peter has also performed and recorded with artists such as Bryn Terfel, The Courteeners, Pink Martini, Mark Almond and Katie Melua.

Peter is passionate about his work with the community and education programmes that he undertakes with the BBC Philharmonic, Manchester Camerata and Orchestras for All.

Peter is Senior Lecturer in Performance at Leeds Conservatoire