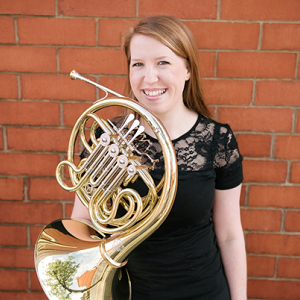 Jenny Cox began learning the Horn at the age of 11 before continuing her studies at the RNCM with Lindsey Stoker, Bob Ashworth and Beccy Goldberg. During her time there she gained a first class BMus(Hons) degree, Post Graduate Diploma and was awarded both the Philip Jones Brass Prize and Goronwy Evans Memorial Prize.

Her varied career has involved numerous appearances at the BBC Proms, recording as a session musician for radio, television and film, and deputising on touring shows such as ‘Phantom of the Opera’. Chamber music projects have included Brahms’ Horn Trio with ‘Small is Beautiful’, Dohnányi Sextet with Ensemble 360 and appearing as soloist in Britten’s ‘Serenade for Tenor, Horn and Strings’ with the National Festival Orchestra.

In addition to performing, Jenny has a passion for education and outreach, working as brass teacher and animateur in primary, secondary and SEND schools.