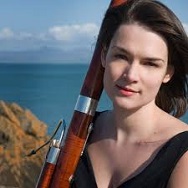 Llinos Owen was born in Pwllheli in North Wales, where she found an old bassoon in a school cupboard.  At 16, she bravely crossed Offa’s dyke to receive her musical education at Chetham’s School of Music in Manchester, then at St. Catharine’s College, Cambridge, and finally at the Royal Academy of Music in London, where she was awarded the marvellously named Winifred Disney Entrance Scholarship.

As well as being Principal Bassoon with the Northern Chamber Orchestra, Llinos is also Sub Principal Bassoon doubling Contra with the Royal Ballet Sinfonia, with whom she tours the country with the Birmingham Royal Ballet. She is also a grade examiner for the ABRSM.  Llinos plays with many chamber ensembles throughout the country, and also enjoys working with large symphony orchestras including The Halle, The Orchestra of the Royal Opera House, Opera North, the BBC National Orchestra of Wales, as well as travelling to play with the Symphony Orchestra of India.  She is a founding member of the bassoon quartet ‘Reed Rage’.

Following a car accident in 2009, Llinos now trains and competes with the GB Paralympic Kayaing Team. When not playing the bassoon or training on the river, Llinos enjoys kayaking around the coasts of Wales and Scotland, watching the garden birds, and following international rugby.