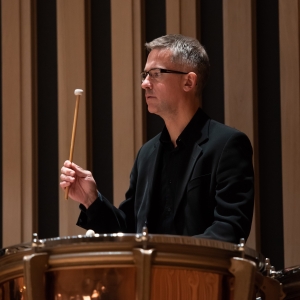 John Melbourne is the principal timpanist of the NCO.  He is also principal percussion of the Northern Ballet and Manchester Concert Orchestra.  He freelances with many of the major orchestras in the north of England.

Some of John’s career highlights include The Lucerne Festival Orchestra Rite of Spring with Charles Dutoit, Turandot at the Royal Opera House, War Requiem with the City of Birmingham Symphony Orchestra on a European tour and at the Proms and Britten’s Death in Venice with Opera North.  He also particularly enjoyed Northern Ballet’s 2013 production of The Great Gatsby, which included the last movement from Richard Rodney Bennet’s Percussion Concerto.