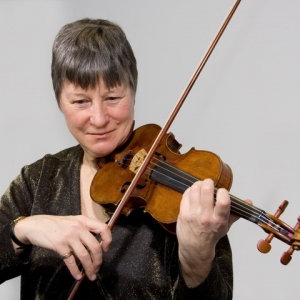 Louise Latham studied at the Royal Northern College of Music gaining a teaching diploma with distinction, a performing diploma and was awarded the Hiles Gold Medal for orchestral playing. She was a member of the BBC Philharmonic for six years before commencing a busy freelance career working with the BBC Phil, Halle, Scottish Chamber Orchestra and Northern Chamber Orchestra . In 2001 she was invited to tour the USA for three months as leader of London City Opera Orchestra . Highlights of her orchestral work include a concert in Carnegie Hall whilst touring the USA with the Scottish Chamber Orchestra and more recently, Wagner’s Ring Cycle with Opera North

Chamber music has always been a major interest, both as a player and coach, currently performing with the Aquarius Quartet.

Teaching commitments involve her at Manchester University, as course director of chamber music and string orchestra and chamber music courses at Borwick Hall and Higham Hall and with violin students of all ages.