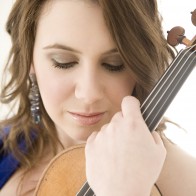 Record-breaking numbers of people from Macclesfield and surrounds enjoyed the Northern Chamber Orchestra’s 2015 / 16 Heritage Centre season. The hotly-anticipated, new Macclesfield series gets underway on Saturday 8 October, 7.30pm, when the orchestra is joined by violinist, Chloë Hanslip, the first of three phenomenally-gifted, young soloists who will be appearing with the NCO for the first time in the forthcoming season. She started playing violin at the age of two! Still only in her mid-twenties, Chloë has already established herself as an artist of distinction on the international stage. She made her BBC Proms debut back in 2002 as an unbelievably-talented, multi-award-winning teenager and has gone on to play at major UK and global venues with many of the world’s most famous orchestras – attracting white-hot reviews.  She has collaborated with eminent conductors such as Sir Neville Marriner, Sir Andrew Davis, Marris Jansons and Jeffrey Tate and has recently given concerto performances with the Tokyo Metropolitan Symphony, Czech Philharmonic and National Symphony Orchestras, Bremen Philharmonic, Royal Liverpool Philharmonic, BBC National Orchestra of Wales and in the USA, the Phoenix and Alabama Symphony Orchestras, amongst others.  A Classical Brit award-winner in 2003 (Young British Classical Performer) she records on the Hyperion label.  Chloë is a committed chamber musician, and makes her Northern Chamber Orchestra debut playing Beethoven’s ‘Violin Concerto’ – a masterpiece which famously features a dazzling finale, showing off the instrument’s melodic range.

The concert, entitled ‘Dazzling Spirit’, gets off to a passionate, stirring start with Weber’s Overture to the ‘Ruler of the Spirits’.  It also features the idyllic ‘The Banks of Green Willow’ which provides a tantalising glimpse of the talent of George Butterworth, a great English composer in the making when his life was cut short in the Great War a century ago.  This moving, pastoral work was played recently at the international ceremony to mark the centenary of the Battle of the Somme at the Thiepval Memorial in France on 1 July.  The composer served with the Durham Light Infantry in the First World War and was awarded the Military Cross (twice) but did not live to receive it, as he perished at the Somme on 5 August 1916.

Beethoven composed his ‘Violin Concerto’ in a matter of weeks and its premiere followed a few days after its completion. Similarly, Mozart’s magnificent ‘Symphony no 36’, nicknamed ‘Linz’, was written in a frantic hurry (in just four days, during a stopover in the Austrian town, Linz!) and yet it stands as one of his late masterpieces.  They both certainly knew how to produce their best under pressure!

The Northern Chamber Orchestra’s Artistic Director, Nicholas Ward said: “I’m very pleased with the way our new season’s concert programmes have worked out.  I’m looking forward to all of them and to working with more great soloists, several of whom will be appearing with the NCO for the first time, such as violinist Chloe Hanslip, flautist Adam Walker and pianist Lara Melda.  Chloe is opening the series with what is undoubtedly one of the greatest works for violin – Beethoven’s first and amazingly, only concerto for this instrument.”

Once again, NCO’s Macclesfield concert season has been sponsored by Manchester Metropolitan University’s Faculty of Education, one of the UK’s leading, internationally recognised centres for teacher training and professional development.  The Northern Chamber Orchestra is the ‘Orchestra in Residence’ at MMU.  This sponsorship has helped the orchestra to continue to develop exciting and engaging concert programmes for its Cheshire audiences and to work with soloists of genuinely international repute.

Professor Keith Faulks, Dean of the Faculty of Education, said: “We’re delighted to continue our partnership with the excellent NCO and sponsor its new Heritage Centre Season. The concerts feature some of the region’s finest musicians and we’re thrilled to help bring this fantastic music to an even wider audience.”

Tickets for ‘Dazzling Spirit’ and all NCO’s concerts at Macclesfield Heritage Centre are available from the NCO Box Office: 0161 247 2220; from Macclesfield Visitor Information Centre, 01625 378123; from the Silk Museum Shop at the Heritage Centre and On The Door. Prices are: £18 Auditorium, £14 Balcony, £7 students, 18s & under FREE.  Buying Part or Full Season Tickets saves you money: book upfront for all 8 concerts and get one FREE; book for 4 or more concerts upfront and get £1 off each concert.  Visit NCO’s website at www.ncorch.co.uk for full details about the concerts.

Stephen Barlow writes ‘in the afterglow’ of this year’s Festival