Northern Chamber Orchestra, the Musicians of the Powerhouse, are thrilled to announce a new partnership with The Stoller Hall, Manchester’s exceptional new venue for music and performance. The announcement comes in the wake of the announcement of a new  International Concert Series and plans for the ‘Powerhouse Proms‘.

The Northern Chamber Orchestra are the new Orchestra in Association at The Stoller Hall in Manchester. The Orchestra, which turned 50 last year and is the oldest professional chamber ensemble in the North West, recently announced that in the 2018-2019 season, it will bring a series of concerts to The Stoller Hall, featuring international classical music stars such as pianist Freddy Kempf, the prodigiously talented violinist Chloë Hanslip, and one of the world’s finest clarinettists, Julian Bliss. The Orchestra is also seeking funding for a ‘Powerhouse Proms’ series at The Stoller Hall, which will demonstrate to investors everywhere what an inclusive mix of opportunity the Northern Powerhouse development will offer. These concerts will help cement The Stoller Hall’s position as a major player in Manchester’s cultural scene.

The Northern Chamber Orchestra rehearse with violinist and Artist in Association Chloë Hanslip at The Stoller Hall.

The Northern Chamber Orchestra is one of the country’s top, professional chamber orchestras, known for its quality and expansive orchestral repertoire. It presents an annual series of eight concerts in Macclesfield featuring soloists of international standing and is also the Orchestra in Residence at Buxton International Festival, where it has been performing with top-flight opera stars and directors at the world-famous event for over 20 years. This year the orchestra will be performing Verdi’s Alzira and Mozart’s Idomeneo.

“We were thrilled to be asked to become the first Orchestra in Association of this wonderful hall, which is in my view, for its size, the finest hall in the country. The acoustics are beyond compare, the architecture takes your breath away, the front of house facilities, including the bar, are top-notch and it is only 50 yards from Victoria Station. To be officially associated with all of this, is a huge honour.” – Tom Elliott, General Manager of the Northern Chamber Orchestra

The Stoller Hall was opened in 2017 and is an intimate, 480-seater auditorium with state-of-the-art acoustics and RIBA Award-winning architecture. 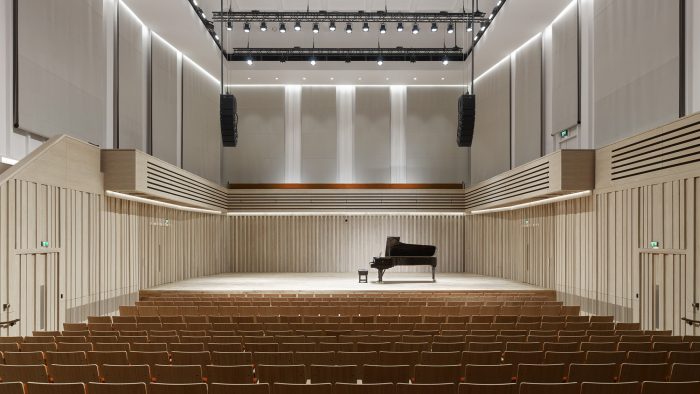 “We’re delighted that, as Orchestra in Association, Northern Chamber Orchestra will play a central role in The Stoller Hall’s programming for seasons to come. Their outstanding reputation for chamber music performance, combined with the quality and range of their soloists, make them a perfect partner with whom to build the Hall’s reputation as an unmissable venue for live music. The planned Powerhouse Proms will take this to yet another level, emphasising the quality and ambition of music making in the North of England and ensuring that audiences continue to enjoy the very best of classical performance.” – Richard Hartwell, General Manager of The Stoller Hall