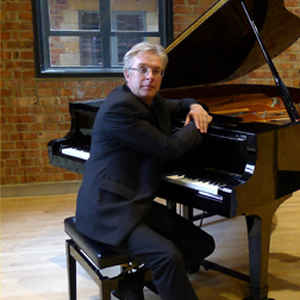 Bernard Robertson enjoys an international career as keyboard player and, increasingly, as conductor.

He has played principal keyboard (piano, celesta, organ…) in virtually every symphony orchestra in Britain, including all the London ones. As continuo player he has worked not only with many of the London period-instrument ensembles (including regular appearances at Glyndebourne with the Orchestra of the Age of Enlightenment) but also with foreign orchestras, including that of the Bolshoi.

Glyndebourne has also been a focal point of his activities as opera coach / repetiteur: he has worked there for 18 years, as well as at leading foreign houses such as Bavarian State Opera, De Nederlandse Opera, and Madrid. He has numerous radio/ TV/ film credits, including ‘Sweeney Todd’ and ‘The Duchess’, and he has played in many dance productions at Sadler’s Wells, notably for Matthew Bourne and Carlos Acosta.

He has been assistant conductor at Glyndebourne (festival, and tour) and Opera North, and for major concerts at the Edinburgh International Festival. His special interest in choral direction has led him to conduct (among others) Brighton Festival Chorus, the Glyndebourne chorus, and the Arnold Schoenberg choir of Vienna.